A Grade
With wet roads at the start of the race the strong looking A grade bunch had a nice steady start. New GSCC member Gary Wearmouth got away at the top of Forest Rd for the first time and got himself a very good gap quite quickly. The rest of the group had to work quite solid together for most of the way out forest Rd. While it was drizzling Brad was telling us how good his new new top was! Then it took to Brad Hasket’s attack up the Gulley to real Gary in. The pace was quite steady along most of the way back along Forest road with Kane putting in a couple of teaser attacks of the front. Unfortunately Dave Warren punctured along Grays Rd. The group stayed together to the last time up Forrest rd with Brad and Gary getting a gap with Andrew Baker also getting a flat. Kane made the gap to the others on top of the hill. The front three worked hard together with the rest chasing. They held this gap to the finishing sprint. Brad started the sprint leadout with Gary and the Kane coming past and Kane just passing Gary at the finish line by less than a tyre. Other competitors. Dave Warren Andrew Baker Tony French Ashley Goldstraw Harvey Lang.
Results:
1.K.Airey 2. G.Wearmouth 3. B. Haskett
Average 38.54 km/hr

Well what a classic race – firstly Ian “I love a break away” Amsden, was nowhere to be seen at the start and held us all up for 5 minutes and copped the wrath of the race referee, Terry Robinson, so the group then enforced a “gentlemen’s” penalty that Ian must ride on the front all the way up misery lane on the first lap, however Neil Maurer didn’t like the plan and was off the front straight away. Well the discussion went through the ranks to just let him go and burn himself out into the headwind along misery lane and out Forest road.

This script however didn’t suit Barry Howden and he quickly shut down this move going up the bumps in Forest Road. Marcus and Shane were quite relaxed sitting back watching Jimmy Knott ( I think Marcus was even laughing at one stage, something that Jimmy must have thought it was a crit race) taking turns at the front with Nick Oakley, Darren McCallum, Neil Maurer, Phil Tehan and Barry Howden.

Halfway out Forest road, a dangerous little move from Neil and Barry was quickly closed down. Phil was continually driving the pace with his million miles an hour cadence. Not sure if he used the big chainring today.

After the Forest Rd turnaround, Jimmy resumed normal practices at the rear or the bunch and the work was left to Barry, Nick, Shane, Phil and Darren to drive the pace back to Grays Rd.

Grays Rd was a down breeze delight with a couple of the “heavier” riders driving the pace up around the high 40’s in several sections trying to split the bunch wide open.

Coming around with a lap to go, Barry had a puncture. There were a couple of suggestions that we could all stop and help him change it, as it seemed unfair for the reigning B Grade Scratch winner of 2 weeks ago could not retain his title due to a mechanical but the decision was made to keep racing in the spirit of the Anzac’s.

Misery lane was everyone looking at each other. Phil, Ian & Darren were left to do most of the work up this section. Ian checked in with the bunch if we had an extra circuit to go or if this was it (Trying to make up for his lack of course understanding on the last scratch race).

The “ S Bend” and the Forest Rd bumps were very uneventful.

Darren and Shane had a little burst after the Forest Road corner, down Grays road gaining 20 metres over the group with a little surge into the high 40’s / low 50’s but soon got shut down by a very attentive bunch.

Then it was back Phil & Darren driving the tempo until Misery lane and the mind games began. Darren made a quick sprint and gained 50 metres after the first lump on Misery lane, Neil closed this down and brought us all back together. The workhorse Phil was still cracking along and with Ian they upped the pace and the group were all together at the “S Bend” into Larcombes.

The sprinters were all lining up.

Phil & Ian both away early, cooked themselves into the head breeze. Darren and Neil were looking at each other waiting to go. Shane was sitting and waiting when Neil comes past with Jim “haven’t seen you for an hour” Knott on his wheel.

The Sprint was on!

Darren burst clear and was never headed, Nick chasing his wheel. Neil and Jimmy not far behind with Shane now chasing hard for a wheel.

Darren a clear winner from Nick and Shane slipstreaming Neil and Jimmy for a “Mandy Like” third…
Results:
1. D.McCallum 2. N.Oakley 3. S.Korth
Average 35.81 km/hr

C Grade
Eight riders set off at a brisk pace on the 46 kilometre journey at Paraparap. The pace was kept high by Craig McSwain, Darren Eagle (Eureka) and Vic Mason working strongly out Forest road. Darren had a mechanical issue on the Forest road hill and Chris Colley fell off the pace. The six remaining riders kept the speed high on the return from the Forest road turnaround with Peter Wynne and Josh Williams keeping their noses out of the wind. Once back onto the Hendy Main road circuit Josh put in a strong surge up misery lane Forcing riders to scramble for wheels to prevent being dropped. The race was back together by Forest road and set up for a sprint finish. In the push to the finish line Vic Mason, with Paul Bird on his wheel, had the bunch covered on the right hand side of the road when Peter Wynne put in a beautifully timed burst of speed down the left of the road to take out the race.
Results:
1. P. Wynne 2. V.Mason 3. P.Bird
Average 33.93 km/hr

D Grade
With the weather conditions looking like the rain was going to hold off, the race started on wet roads with a group of 5 riders heading off into the wind.
A solid tempo in the early km quickly seen a rider off the back by the top of misery lane, with solid efforts being put in by three riders another rider was dropped on the approach to Forest Rd. The pace remained consistent with the remaining 3 riders working well together.
The average pace remained solid but comfortable with all riders taking turns of pace. As the riders approached misery lane, some discussion began around the final part of the course. Are we circulating again or was this the last run up to the finish line?
With the group a little unsure of what was to come next the group took turns up the remainder of misery lane, taking the final turn together at a somewhat sedate pace.
At this time the riders looked up the road and agreed that another lap was in order, however as the line approached the flag was seen being waved, with a quick look at each other the three riders took off for a gentlemen’s sprint to the line with about 500 meters to go. Andrew managed to take the lead over John and Paul in the approach to the line. A great ride by all.
Results:
1. A.Booth 2. J. Bell 3. P.Bubb
Average speed 31.11km/h

E Grade
Phil Robinson was the only competitor in this grade. 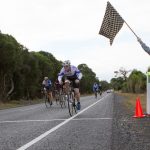 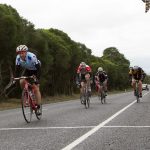 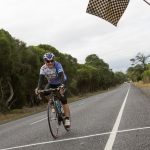 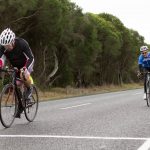 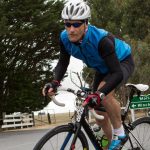 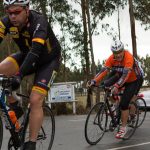 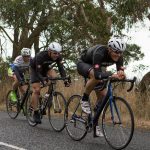 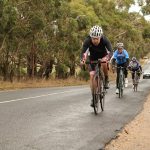 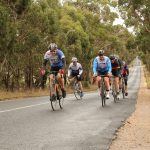 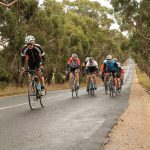 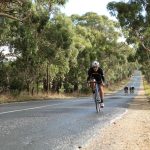