9 A grade riders lined up at the start on a glorious spring day with a very light north wind.

After a little banter and some light whining from our oldest A grade rider, Juddy the race got under way at a fairly sedate speed. The first, all be it half hatred, attack came on the first rise up Nobles with Dave Warren Looking to see who was interested in chasing and who was going to sit and wait. This got things moving though with Rick Buckwell Making the first of many strong attacks. After the turn around Andrew Baker Also had a go and made it stick for a couple of kilometers before Harvey Lang Chased him down. This was the beginning of a trend for Harvey. The pace then dropped bringing Jeff Miller to the front to move things along at the turn into Larcombes and into Forest and the forest road Hills. On the first Rise Rick went and on the second David Newett. Dave then got off the front for a number of Kilometers before a concerted effort by Rick, Andrew and Harvey to chase him down. Unfortunately for Jeff, after his long turn on the front he was left seesawing off the back when the attacks came.

The pace then stayed on, with a flurry of attacks by Rick and Dave, each it seemed to be chased down by Harvey. With Gumflats looming Dave Newett took off again and was only caught at the bottom of the hill. The pace was relatively easy until the road kicked up and Dave Warren tried to go. With a little success, he had another go on the second kick but only managed to take a few meters out of the 3 remaining riders. The left hand turn at the top saw the gap open to 50 meters as Andrew slid on the Gravel and reverse camber. With Dave off the front the chasing 3 (Harvey, Rick and Dave Newett) held the Gap allowing Andrew and Daniel Hall to get back on. The Gap then quickly closed but the pace remained high with a number of small attacks but Harvey was quick on their heels and the first over the two rises on Forest and into Larcombes. The speed then steadily increased until Dave Newett took off with a long Sprint. Dave Warren Also Jumped and managed to pull alongside. Dave Newett’s Chain seemed to jump allowing Dave Warren to pull ahead.

Special Mention to Carl Judd our oldest A grader on the day. Despite the whining we would love to ride with him again next week. Good effort Juddy.

The race was a little late to start in B grade this morning with Shane Korth somewhere far up Grassdale Rd while we waited to get stuck into the beautiful racing conditions on the excitingly different (and lumpy!) course out to Nobles Rd then Forrest with a dip down/ up Gumflats then finishing over the hill in Larcombes. B grade riders numbered nine today with Chris Fennech, Vic Mason, Shane Korth, Jim Knott, Andrew Read, Ian Amsden, Rob Southern, Kane Airey and trial rider Paul Sheean.

We set off on Shane’s return with rolling turns at a manageable pace up Misery Lane until rounding the corner into Larcombes Rd when the first shots were fired by Kane Airey attacking repeatedly up the rise but to no avail. Everyone stayed together around the corner into Nobles Rd and several riders were flexing their muscles on the slight inclines including a very watchful Andrew Read, trial rider Paul Sheean and an attacking Kane Airey but no escapees were allowed to break free at this point in the proceedings. That would come later…

The return trip down Nobles Rd was fairly uneventful with the group staying as one until rounding Larcombes Rd corner when a car was entering the intersection as we rounded very widely. This adrenaline hit spurred Ian Amsden to attack the group up the hill which was short lived but hopefully put some lactic acid in the chasers’ legs before hitting the next hill on Forrest Rd. Ian put in another effort up the Forrest Rd Hill but was soon joined by the rest of the bunch for a quick trip over the hump followed by a pacey turn by Chris Fennech up to the next rise.

A few more flurries were shut down on route to the turn around on Forrest Rd with the pace increasing as we approached Gumflats, with everyone keen to be as close to the front as possible before the decent. The bunch stayed together until the turn around when Ian again decided to attack the group early after rounding the cone and soon established a gap. The gap was maintained until the steeper sections when several riders bridged including Rob Southern, Jim Knott and Paul Sheean. Rob attacked at the top of the climb but couldn’t shake the rest of the breakaway members, so a brief conversation was had rounding the corner onto Forrest that the group could stay away if everyone put in their best effort.

The front group worked well together with hardly a pause to look back the whole way up to the base of the Forrest Rd climbs when Rob Southern attacked the breakaway on the first hill in an attempt to solo to the finish. The other riders were able to respond and regroup for a quick trip down Forrest Rd before rounding the bend into Larcombes for the finish.

The two newest riders (Rob and Paul) were not fooled into starting their sprint too early and launched their sprint from the front at approximately 150 to go. Paul was able to hold off Rob by a bike length with Ian a distant third followed by Jim. Paul proved to be a rider to watch on his first ride with the club but did not take qualify for the win as he was doing a trail ride. This meant Rob Southern was first, Ian Amsden was second and Jim Knott was third with the rest of the bunch finishing about half a minute behind the lead group. Average speed 36.2kms/h

C Grade started out well, and the group were taking turns for most of the trip up to Nobles Road, heading out on Nobles there were some minor squirts heading up the rises with everyone staying together. After the turn on Nobles there was some more aggressive movement but nothing that would break the group. Back on Forest Road there was little action but a steady pace until the bumps before the Gundry’s U-turn, when a series of small attacks on the rises by Darren continued heading back towards Gum Flats – but the group stayed together. Gum Flats saw the group break slightly with 3 riders opening a small gap of about 30m. The three stayed together and organised themselves well, rolling turns all the way back down Forest Road, opening the gap to a distance that couldn’t be closed.

Gum Flats Road was back for scratch racing! With perfect conditions, twelve riders in D grade set off with three trial riders; Peter Hunt, Jenny Denouden (Woohoo another women) and Nigel Pearson. Peter Hunt showed his strength along with good efforts from Ray Clifford, Paul Bubb, Tina Stenos, Colin Hooper, Peter Wynne and Nigel Pearson. Gum Flats Road is where the race took shape. Mandy Hosking rocketed down the hill, but couldn’t hold the lead. Peter H., Peter W., Tina and Nigel made it up the hill first. A breakaway of three strong formed with Peter, Nigel and Tina. They managed to keep the chasers at bay. Tina took line honours for her first win; it must have been the power of the polka-dot T-shirt she grabbed in the morning! Nigel and Peter followed closely, since Nigel was a trial rider Ray Clifford moved into 3rd. Well done to all who braved Gum Flats!

E grade, well done to Ken Mansfield and ian Sumner who rode together for the whole race and toughed it out for a good sprint contest won By Ian.

A great turn out of 44 riders, including 4 trial riders and a lot of newer members today in very good conditions for scratch racing. Thanks to the time keeper Dave Robinson, referee Ross West and marshals for their help for another safe day of bike racing. 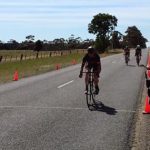 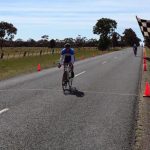 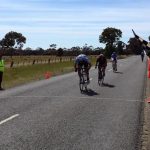 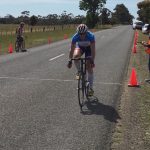 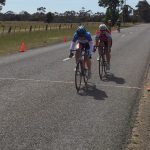 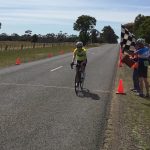 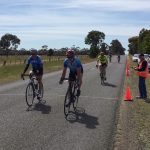 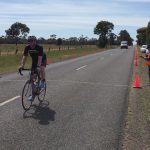 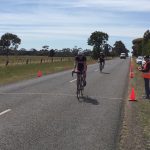 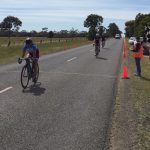 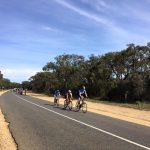