There was a high level of anticipation throughout the club in the week leading up to the inaugural Arisun Ascent as it was to be run over a new 62km course featuring a number of hills not least of all being 2 ascents of Gum Flats Road (1.1km @ 6%) including the run to the finish.

46 riders got underway in very cool but clear and calm conditions.

Ken Mansfeild was the lone limit rider with 7 bunches in pursuit, scratch starting 45 minutes after Ken.

All bunches were working well together but the large 8 man scratch bunch were on a mission and started reducing the time gaps heading down forrest road rarely below 40km/h.

The first ascent of Gum Flats road included King of the Mountain awards for each of the bunches who were taken out by:
Ken Mansfeild
Mick Barnes
Jamie Robinson
Frank Gasperic
Darren Williams
Harvey Lang
Dave Warren
Rick Buckwell

With many of the bunches now reduced the intact scratch bunch powered on. The first catch was of the three remaining second scratch riders plus Shane Korth not long after the turn into Larcombes road, this was followed by the 3rd scratch bunch up the first climb in Nobles meaning a large group now charging along to the Nobles rd turnaround.
The large group swelled further with the next catch on the last climb of Nobles when the remaining 4th scratch group, led by Darren Williams, were also caught.

The pace eased off slightly as the large group made their way back along Forest road with various riders contributing to the pace and remaining 2’s and 3’s being caught.

With about 10kms to go the chasing bunch got a glimpse of the flashing yellow light indicating the front of the race. The 4 riders that had stayed away were Tina Stenos, Frank Gasperic, Andrew Booth & Jamie Robinson, mainly from the 17 minute group.

Rounding the forrest road turnaround the gap was narrowing but not quickly. Brad Haskett and Paul Beretta flirted with a brief move off the front but were quickly brought back. There was then a reluctance to go to the front into the head wind and with the pace dropping Rick Buckwell tried his hand at an escape but he too was brought back.

With about 500 meters to the corner of Gum Flats Road all the groups had become one (great handicapping Robbo) with the last of the out-markers caught as the large peleton of about 25 made it’s way down Gum flats Road. With everyone safely around the tight turnaround the scene was set for the final 1.1km climb.

The climb got off to a slow start and the peleton compacted slightly before Josh Williams made a blistering attack. He must have caught the others off guard because the bunch were slow to react and he managed to get a small break. With no discernible change in speed, in a very SKY train Ritchie Porte way, his advantage was pulled back. With the same rate of attack he earlier exhibited, he then went backwards through the field not to be seen again. The group was thinning out now, with Daryl Burns, Matt McDonough Andy Goodwin and second scratch man Dave Warren slightly ahead of Nick Brown, Rick Buckwell and Paul Baretta. Andy Baker, Brad Haskett, Richard Lyle and the rest were starting to lose touch as the first rise was completed.

It was at about this point with about 400m to go that Matt hit the afterburners and took off like Shane Korth down Anglesea hill. In a valiant attempt to catch Matt, Daryl, Dave, Andy Goodwin and Nick launched their run to the line. In the battle of the rest, Paul Baretta, Andy Baker, Rick Buckwell and Brad (I shouldn’t have had steak and eggs for breakfast) Haskett were slogging it out.

In a great finish to a great race, Matt, as sponsor of the race was ‘allowed’ to win, daylight was second.

A big thanks to Asirun tyres for sponsoring the event, race referee Colin Hooper, handicapper Dave Robinson, course designer and promoter Kane “President” Airey and all the Marshals.
Congratulations to everyone who participated and for all the great feedback – it would appear this might become an annual event. 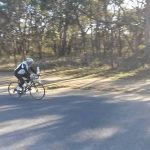 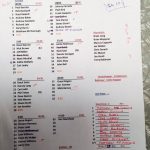 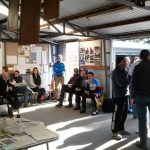 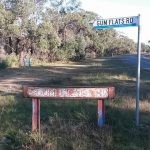 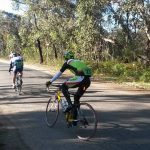 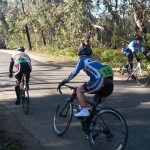 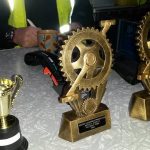