KVA Design Summer Sash Race March 1st 2015
Out and Back Forest Rd plus 2 laps, finishing in Larcombes Rd. 57km.
A field of 36 steadfast riders tackled the great morning conditions with a strong southerly blowing by the end of the race. Most of the bunches started with 5 or 6 riders today.
Brian Long started off limit as the lone ranger for the day as his sidekick Ian Sumner had DNS next to his name. With the handicapper giving Brian an encouraging starting time of 32 minutes, Brian still had a very hard task in front of him.
The second limit group of 6 riders Ross West, John Bell, Terry Robinson, Gavin Gamble, Jamie Robinson and Grant Rogers, started 8 minutes behind Brian and were very keen to take the lead of the race early which they did on the return along Forest Rd and were working very well together to keep their lead, but with still more than half the race to go they had a lot of work to do.
The other main moving group was the third scratch group (5min) of Carl Judd, Shane Korth, Neil Maurer, Barry Howden, Mark Cummings and with the man in good form, Ian Amsden. They caught the (7.30min) group on Grays Rd for the first time making a very large strong group, but still had quite a lot of work to do to catch the leading 24min group.
Meanwhile the 2nd scratch group of Andrew Goodwin, Harvey Lang, Kane Airey, Stuart Smith and Carl Leahy and the scratch group of Daryl Burns, Richard Lyle, Dave Warren, Andrew Baker and Jeff Miller were making up good time on the road riding quite fast. The 2nd scratch group held off scratch till a lap and a bit to go. These two groups combined with some help from the 2nd scratch riders.
At the front of the race the leading group started to break up on the last lap and the big chasing group of the combined 5min and 7.30min group lost some of their earlier momentum, while the combined scratch group were very determined to make the catch with some riders within view on the last lap.
The remaining four riders of the lead group rode well to the finish line with a very close sprint between John Bell and Gavin Gamble, with Ross and Terry not too far behind. The rest of the placing were still up for grabs with Barry Howden finishing 1:30 behind John Bell, in front of Neil, Mark, Shane and Barry Clay. The chasing scratch group were less than a minute behind with Daryl Burns again being the fastest sprinter from this group.
John Bell was the strongest finisher today to take a well deserved win and nice red sash to go with. Thanks to Laurie Fitzsimons and Lou Rogers for filling in for marshalling and Diane Howden for the photos once again.
Results:
1st John Bell. (1:47:24) 2nd Gavin Gamble, 3rd Ross West, 4th Terry Robinson, 5th Barry Howden, 6th Neil Maurer, 7th Mark Cummings, 8th Carl Judd 9th Shane Korth, 10th Barry Clay. FT Daryl Burns (1:25:31)
Graded scratch Races next Sunday 9am Start and also the Central Vets Open Race. 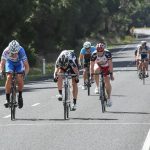 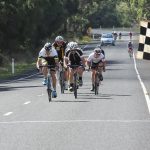 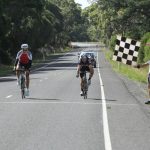 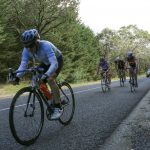 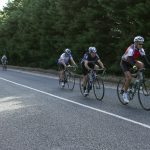 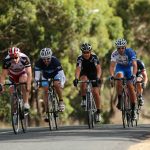 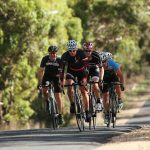 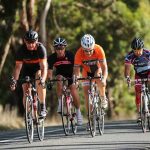 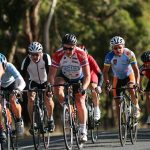 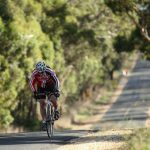 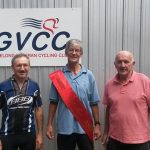