The Geelong leg of the Western District Combine races was very well attended with eighty starters from Geelong, Colac, Eureka and Warrnambool vets clubs. The weather was cool, with a very strong westerly wind increasing in strength during the race which made the conditions quite precarious….a lot of riders thinking the BBQ afterwards was looking better than the race. Deep dish wheels weren’t the best idea for today.

The handicapper had a tough task of getting the groups right today with so many riders and the tough race conditions.

There were nine handicap groups starting, having approximately 9 or 10 riders in each with 28 minutes from the limit group to the strong scratch bunch.

The limit group of 8 riders set off at 10am and were going to have a tough day….with the strong winds, it was a matter of when they were going to get caught. Most of the groups were struggling with inconsistent turns and some riders find the going too tough. These groups were definately going to be caught.

It takes a well combined and even group to make up good time on the road in such horrible conditions, with the best two bunches being the remnants of the 13 minute group of Daryl Suter, David Spence, Chris Fenech, Laurie Paltridge (W), Josh Williams, Phil Tehan(N) and Steve Young along with what was left of the second scratch group of Dave Warren, Andrew Rushton(E), Peter Keil(E), Justin Vincent(W), Richard Lyle and Anthony Seiplot.

The 13 minute group caught the 16 minute group up Forest Rd the final time and they had a few helpers to assist to quicken their pace making it very hard for the back marker groups to make the final catch. The second scratch group caught the 7 minute group the second last time up Misery Lane with a few helping turns from Heather Hamling(C), Jeff Miller and Kane Airey. But they obviously didn’t need the extra help for too long as they went over the Forest Road hill at an unbelievable pace leaving everyone in their wake and with Anthony, David, Richard, Andrew and Peter continuing to ride very strong and determined to catch the leaders.

Meanwhile the scratch bunch of Gary Wearmouth, Tony Mirabella(E), Paul Beretta, Nathan Hill (TR) Andrew Baker, Andrew Goodwin, Rick Buckwell and Guy Fella (E) were down a couple of riders from the start which made their day even harder having to catch the determined second scratch group with a 3 minute gap and also with the wind at its worst when they finally started.

The combined 16 and 13 minute groups caught the leaders of the race up Hendy Main Rd (Misery Lane) for the last time with a lot of riders happy to sit on into the north westerly winds. There were only a handful or riders doing turns and a mighty good job at this time of the race.

As the big leading bunch turned left into Nobles Road and the gruelling cross winds Laurie Paltridge had noticed there where quite a few sitting on and decided if they weren’t going to help they would be put into the gutter! This split the group in a big way with lots of tired legs and riders not being able to hang on up the first rise in Nobles Road. Josh Williams was the only rider to stay with Laurie, then Chris Fenech and Steve Young a bit further back and then again followed by Darren Williams and Phil Tehan. These three groups of two stayed this way till the finish line. Laurie and Josh made the deserved gap and then started working well to the rise up Nobles Rd where again Laurie was putting the pace on with Josh just being dropped, Laurie waited for Josh before the turn around. After the turn around and bigger body the faster finish suited Josh which he was doing most of the work all the way back to Larcombes Rd. Josh then out sprinted Laurie for a well deserved win with Laurie taking a great second place. Chris Fenech was a distant third and Steve Young fourth for his first ride back after some time off. Second scratch stayed clear of the scratch bunch but couldn’t catch all in front of them still nearly 3 minutes behind the winner. Scratch finished a further minute and a half behind with Gary Wearmouth taking fastest time sprinting over Paul Beretta and Guy Fella.

Thanks again to Beretta’s Bike Studio (190 Latrobe Tce Geelong) the course marshals, the handicapper and race referees for making another great race. 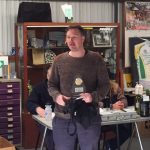 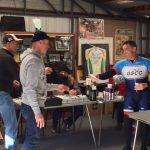 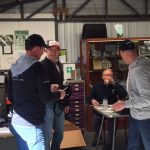 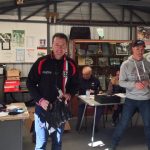 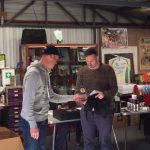