GSCC members had some great results at this weekends VVCC Eureka Open with 3 riders in the top 10.

Jamie Robinson was the standout result taking out first place followed up with Mandy Hosking in 5th and Tina Stenos in 7th.

Congrats to Jamie, Mandy, Tina and to all 22 GSCC members who competed

Jamie Robinson won the Eureka Open from fellow 23:30 min rider Gerard Hickey.
Congratulations to Jamie, who is also the first Geelong & Surf Coast rider to win the Eureka Open.
1st – Jamie Robinson, Geelong & Surf Coast CC, (23.30 min)
in 1h 44m 4s. Average speed 33.42 kph
2nd – Gerard Hickey, Colac VCC, 23.30 min.
3rd – Jane Clifton, Colac VCC, 20.30 min.
4th – Barry Robinson, Eureka VCC, 20.30 min.
5th – Amanda Hosking, Geelong SCC, 20.30 min.
6th – Terry Collie, Eureka VCC, 20.30 min.
7th – Tina Stenos, Geelong SCC, 20.30 min.
8th – Jo O’Shaughnessy, Grampians VCC, 20.30 min.
9th – Tony Lloyd, Grampians VCC, 20.30 min.
10th – Robert Young, Eureka VCC, 23.30 min.
Fastest Time – Trent Stevenson, Goulburn VCC, (Scratch)
in 1h 22m 34s. Average speed 42.13 kph
Visiting Veteran Ride of the Day – Noel Said, Northern CC
Eureka Veteran Ride of the Day – Greg Curnow
It was a cold day, but the rain and drizzle stayed away for the duration of the race.
There were many stories from the day…
Scratch set off at a blistering pace and had shed two of the nine starters by The Avenue of Honour. One by one they fell off the back and by the climb out of Addington, Scratch had been reduced to just three riders…
Noel Said travelled to Ballarat to compete in his first Open race…unfortunately the Eureka Open was being staged at Learmonth, some 20 kms out of Ballarat. Noel got to the club rooms in time to register and get changed. Noel made it to the start line in time, but had not pinned his race number on…so a mad dash back to the club rooms, then back to the start. Noel eventually finished in 62nd position. We hope he continues to race in Opens in the future!
Greg Curnow competed in the Eastern Vets CC Graded Scratch races (at Learmonth) on Saturday, he had a very tough day at the office by all reports. Even Greg wouldn’t have thought that things could get tougher at the Eureka Open…
Greg lasted with his 23:30 min bunch all of 50 metres before flatting. Most riders would have welcomed the opportunity to say ‘oh well, I tried’, then retreated to a hot shower. Not Greg though. He set about repairing his flat tyre then restarted the bike race alone. The 12:00 min bunch picked him up before the first turn and Greg tried to hang on. Group after group dropped Greg and by the halfway point (turn into Black Bottom Rd) he was already a clear last with only the tail car for company.
Three riders abandoned the race, not our Greg though!
He completed the race (83rd and last) 24 m 41 s behind the winner after virtually riding the race without a bunch. 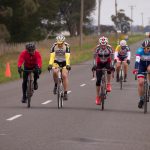 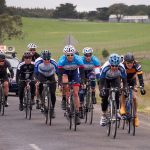 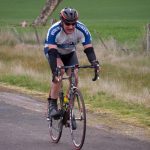 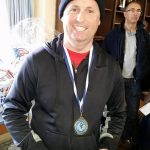 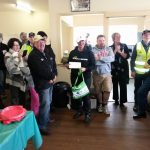 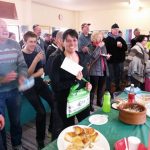