A solid group of Geelong riders headed to Terang for the Boydle race in horrible conditions.

A field of 55 riders started the race.
Riders were welcomed with 40 to 50km an hour westerly winds and some of the heaviest rain possible during the first lap.

Many of the Geelong riders were in the 4 minute – Shane Korth & Eddie Z and 5.30 minute bunches – Barry Howden, Carl Judd, Neil Maurer and Barry Clay.

Barry Clay was the first to pop off the back in the first 5 km of the race and the 4 min bunch had caught the 5.30 bunch in the first 10 km in driving rain.

A couple of KM’s later the combined group of some 19 riders from the 4 min and 5.30 worked out that they had missed the turn off so their raced was finished.

Several others from the 2 minute bunch also missed the corner – including Andrew Baker.

New Geelong rider Gary Wearmouth, started from scratch and slowly worked his way through the reduced field and came to the line in a bunch of 3 scratchmen and won the sprint for 1st and fastest time in 1.06 at an average of 40km which was amazing considering the conditions.

Lance Rogers was the only other GSCC rider to place coming in 7th place. 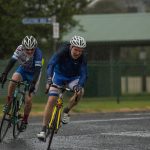 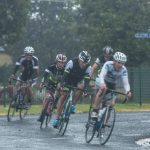 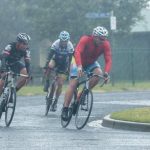 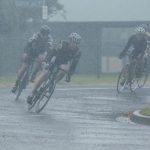 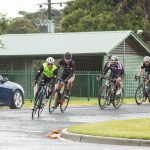 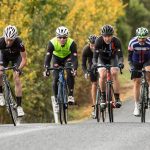 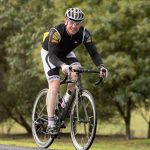 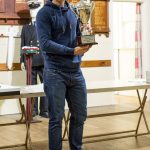