With a few members heading up to Adelaide for the Aust. C’ships, Sunday’s race still had a good turn out with almost 40 riders. Riders were obviously eager to fine tune their racing skills in anticipation for next week’s Open (don’t forget to get your entries in) and the scheduled Scratch race was changed to a Handicap.

The course was 50 km – Out and Back Blackgate Rd, plus 3 laps. Ralph Edwards was set off on his own 21 minutes ahead of Scratch and closely followed by Ian Sumner, Mal Cole and Ross West (17 min). They valiantly rode their best before being caught by the 13 min group and then the 10:30 groups. Meanwhile the 7:30 group was working like a well-oiled machine, with the whole group working together (great effort guys). Andrew Read was doing some strong turns and Phil Tehan was his regular self, spinning his way around the course. It was hard to tell how close Scratch, 3 min and 5 min groups were, except to say they would be working hard to wind everyone back in. Scratch started to work through the 3 & 5 min groups by the second lap and no doubt were looking to emulate Dave Warren’s great result at Warrnambool last week.

By the time Dave Robinson rang the bell for the final lap, the 7:30 bunch could see the lead group heading up Forrest Road – a mix of the 10:30 and 13 min riders. As the gap closed some neon lights could be seen coming from the group. When they were passed it became obvious it was Jonny Parrello’s new bike – a recent purchase from one of our sponsors Beretta’s Bike Studio. (Nice bike Johnny).

The 7:30 group continued to work well together as Phil, Andrew, Marcus Coppock and Dave Spence did some hard turns down Grays Rd. As the group turned into Hendy Main Rd Chris Fenech tried to pick up the pace in the hope of splitting the group of 15 plus riders. However riders were able to keep it together as they headed up Hendy Main for the last time. By the time they rounded the bend near the club rooms, rotations were being done by fewer riders and there was a hint that riders were tiring or looking to save a bit for the finish. Heading up towards Larcombes Rd Phil, Andrew and Chris were sharing the rotations until Chris was let go by the group. Dave closed the gap just before the last turn – but the effort might have cost him in the end. Chris found himself on his own again as he approached the final ascent to the finish line.

In the end Chris held on for 1st place (1:26:04), Grant Rogers finished a gutsy 2nd over Phil Tehan 3rd. As the main group came across the line, Scratch battled it out with Anthony Seipolt getting fastest time (1:18:31) 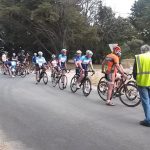 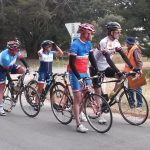