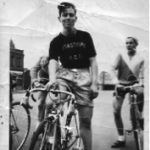 Alfred Long, Brian’s father, won the Barnett Glass Ballarat to Melbourne road race in 1924, so it is no surprise that Brian became an avid cyclist in his teens. Alfred died at 47 in 1952 but Brian at 83 is, apart from a couple of “bung” knees, in excellent health and still riding competitively.

At 18 Brian won the Sebastapol Senior Championships and the Country Senior Road Championships in Melbourne with Stan McLeod from Sebastapol second and Doug McCaughley third. In 1952 Brian joined the Ballarat professional cycling club and from then on he was racing not only for enjoyment but for the money. Marrying Thelma in 1955 and having a family to support he was able to pick up prizemoney around the Western District racing on anything from bitumen to dirt or even grass. He is proud of the fact that he still holds the track record at Cavendish just north of Hamilton because the track was ripped up soon after he won. At Hamilton he won the One Mile Wheel Race and the Five Mile Scratch Race in 1956 – 57 on a grass track.

In 1969 Brian and his family moved to Geelong to take up a job with C B K Knitwear as a sewing machine mechanic. He soon became involved in the local cycling scene and joined the Geelong Amateur Cycling Club where his son had started riding on the track. He organized races, set out courses, undertook marshaling and timekeeping duties and held executive positions. His involvement was rewarded when he was granted life membership of the Geelong Cycling Club.

Brian continued to race in the Western District and an account in the Ballarat “Courier” of April 12, 1982 demonstrates how tough riders were in that period. At the Talbot “Back to Gymkhana”, Brian was third in the 20 km road race but in the track races : “ Brian Long, who rode with Wendouree Cycle Club for some years crashed into the fence in the first veteran’s handicap and was taken to Maryborough Hospital to have his gums and mouth stitched and face abrasions attended to . He showed his courage by returning to the sports ground in time for the veteran’s scratch, borrowed a bicycle and took out third prize in the championship”.

Brian still has an acute memory and is able to recite “chapter and verse” of all his races – competitors, tactics, gears, track and even the weather. He recalls one race where Bill Heseltine who had just returned from the Auckland Empire Games (1950) was wary of the other riders leading up to the sprint, Brian was watching Bill, and as soon as Bill turned his head to check the others Brian was off and he duly won.

The photograph below illustrates road racing in the 1950’s. Brian was competing in the Melbourne to Ballarat road race of 1954 although the route actually was Melbourne, Bacchus Marsh, Geelong and then Ballarat. The photo was taken at Williamsons Creek 12 miles from the finish with Warwick Bolton (NZ) in the lead, Ted Harrison (3rd back), Don Williams (5th back) “Shifty” Arnold (on the near far right), John Beasley (first white cap), Hec Sutherland (in the middle) and Brian Long (tucked away about sixth wheel) Some of Brian’s most memorable races were at the Geelong West cycling track at the time when visiting international riders were brought out by the promoter Ted Waterford. They would race in handicaps and “derbies” – sprint races over 4 laps with five riders on the track at once. As a result of his local success Brian would be a reserve rider but often found himself competing against the likes of Reg Harris (Britain), Enzo Sacchi (Italy), Sid Patterson (Aust), Marino Morettini (Italy) and Jan Dirksen (Netherlands). This was cycling in its heyday with racing every second Friday night with spectators three or four deep around the oval.

Even in his eighties Brian is regarded as one of the strongest and most astute sprinters around. His training regime in Ballarat certainly contributed to this. Training in the morning was a twenty mile trundle with a mate but after work a group of up to 20 riders would assemble for a serious hitout. This would consist of a ride from Ballarat to Buninyong and would include two “Mad Mile” sprints in the centre of Ballarat and this is where Brian honed his sprinting skills.

In 1977 Brian won the first Victorian Veteran’s Over 35 Championship at Learmonth near Ballarat over 65 kms. The Geelong Veteran’s Cycling Club was formed in the same year and in 1985 Brian became an enthusiastic member and he was awarded life membership of the Club in 2010. During this period he competed regularly in Club races, Open events and State and National Championships. He has won the VVCC Open aggregate trophy twice – in 2004 and 2012. Consistently competing at the South Pacific Veteran Cycling Championships at Maryborough over the Easter break he won the aggregate trophy for his age group in 2007, 2008 and 2011. Brian has a drawer full of victory sashes, two shoe boxes overflowing with medals and medallions and a collection of trophies located in the laundry because he has no where else to put them. He has earned the right to be called a true “Veteran” of cycling in Victoria and the quotes below, collected by Rod Charles from various newpaper accounts, attest to Brian’s cycling skills:

“Brian Long hooked up at the back of the bunch and stuck to them like a leech”
“Brian Long is the master of the tight sprint finish”
“Suddenly the race changed for the leaders were napping – Long in an instant charged to the front, Kearney on his wheel, and that’s how they finished”
“A withering late finish by master tactician Brian Long”
“Long took charge and speared to the lead and that was that”
“Brian Long nursed himself away from the heavy work in front and paced himself in the right position for the final sprint and finish” (Oct 1977)
“Long, at 65 years of age, is considered one of the best sprinters in Australian veteran cycling for his age” (1995)

Brian is still racing strongly and like John Randall has expressed some interest in the world one hour record for cyclists over 100. There may indeed be a world record holder in our ranks in a decade or so.